Stigma is the shame or blame caused by false, unfair or negative beliefs that some people have about something that they don't understand - like mental illness.

stigma keeps people from getting help

The consequences of stigma can be very serious. Instead of seeking treatment, people who are struggling with the symptoms of a mental health disorder often live in silence. They may fear for their jobs and the acceptance and understanding of their loved ones. Consequently, they tend to not talk openly about what they are experiencing. Therefore, people with mental health disorders often suffer twice, even though they have not done anything to cause their illness.

Most people who live with mental illness have, at some point, been blamed for their condition. They’ve been called names. Their symptoms have been referred to as “a phase” or something they can control “if they only tried.” They have been illegally discriminated against, with no justice. This is the unwieldy power that stigma holds.

Stigma causes people to feel ashamed for something that is out of their control. Worst of all, stigma prevents people from seeking the help they need. For a group of people who already carry such a heavy burden, stigma is an unacceptable addition to their pain. And while stigma has reduced in recent years, the pace of progress has not been quick enough.

All of us in the mental health community need to raise our voices against stigma. Every day, in every possible way, we need to stand up to stigma. If you’re not sure how, here are nine ways our Facebook community responded to the question: “How do you fight stigma?”

Talk Openly About Mental Health
“I fight stigma by talking about what it is like to have bipolar disorder and PTSD on Facebook. Even if this helps just one person, it is worth it for me.” – Angela Christie Roach Taylor

Educate Yourself And Others
“I take every opportunity to educate people and share my personal story and struggles with mental illness. It doesn't matter where I am, if I over-hear a conversation or a rude remark being made about mental illness, or anything regarding a similar subject, I always try to use that as a learning opportunity and gently intervene and kindly express how this makes me feel, and how we need to stop this because it only adds to the stigma.” – Sara Bean

Be Conscious Of Language
“I fight stigma by reminding people that their language matters. It is so easy to refrain from using mental health conditions as adjectives and in my experience, most people are willing to replace their usage of it with something else if I explain why their language is problematic.” – Helmi Henkin

Encourage Equality Between Physical And Mental Illness
“I find that when people understand the true facts of what a mental illness is, being a disease, they think twice about making comments. I also remind them that they wouldn't make fun of someone with diabetes, heart disease or cancer.” – Megan Dotson

Show Compassion For Those With Mental Illness
“I offer free hugs to people living outdoors, and sit right there and talk with them about their lives. I do this in public, and model compassion for others. Since so many of our homeless population are also struggling with mental illness, the simple act of showing affection can make their day but also remind passersby of something so easily forgotten: the humanity of those who are suffering.” – Rachel Wagner

Choose Empowerment Over Shame
“I fight stigma by choosing to live an empowered life. To me, that means owning my life and my story and refusing to allow others to dictate how I view myself or how I feel about myself.” – Val Fletcher

Be Honest About Treatment
“I fight stigma by saying that I see a therapist and a psychiatrist. Why can people say they have an appointment with their primary care doctor without fear of being judged, but this lack of fear does not apply when it comes to mental health professionals?” – Ysabel Garcia

Let The Media Know When They’re Being Stigmatizing
“If I watch a program on TV that has any negative comments, story lines or characters with a mental illness, I write to the broadcasting company and to the program itself. If Facebook has any stories where people make ignorant comments about mental health, then I write back and fill them in on my son’s journey with schizoaffective disorder.” – Kathy Smith

Don’t Harbor Self-Stigma
“I fight stigma by not having stigma for myself—not hiding from this world in shame, but being a productive member of society. I volunteer at church, have friends, and I’m a peer mentor and a mom. I take my treatment seriously. I'm purpose driven and want to show others they can live a meaningful life even while battling [mental illness].” – Jamie Brown

what you do and say is important

Supportive friends and family can play an important role in the mental health recovery process. Remember that a person cannot just “snap out of it.”

Be willing to listen.

Don't give up if your friend pulls away.

Learn as much about mental health disorders and wellness as you can.

your words matter • say this not that

Your words matter! Everyone deserves to be treated with kindness, understanding, and respect, NOT with negative, judgmental, or hurtful words. Think about what you might say and how your friend might feel. 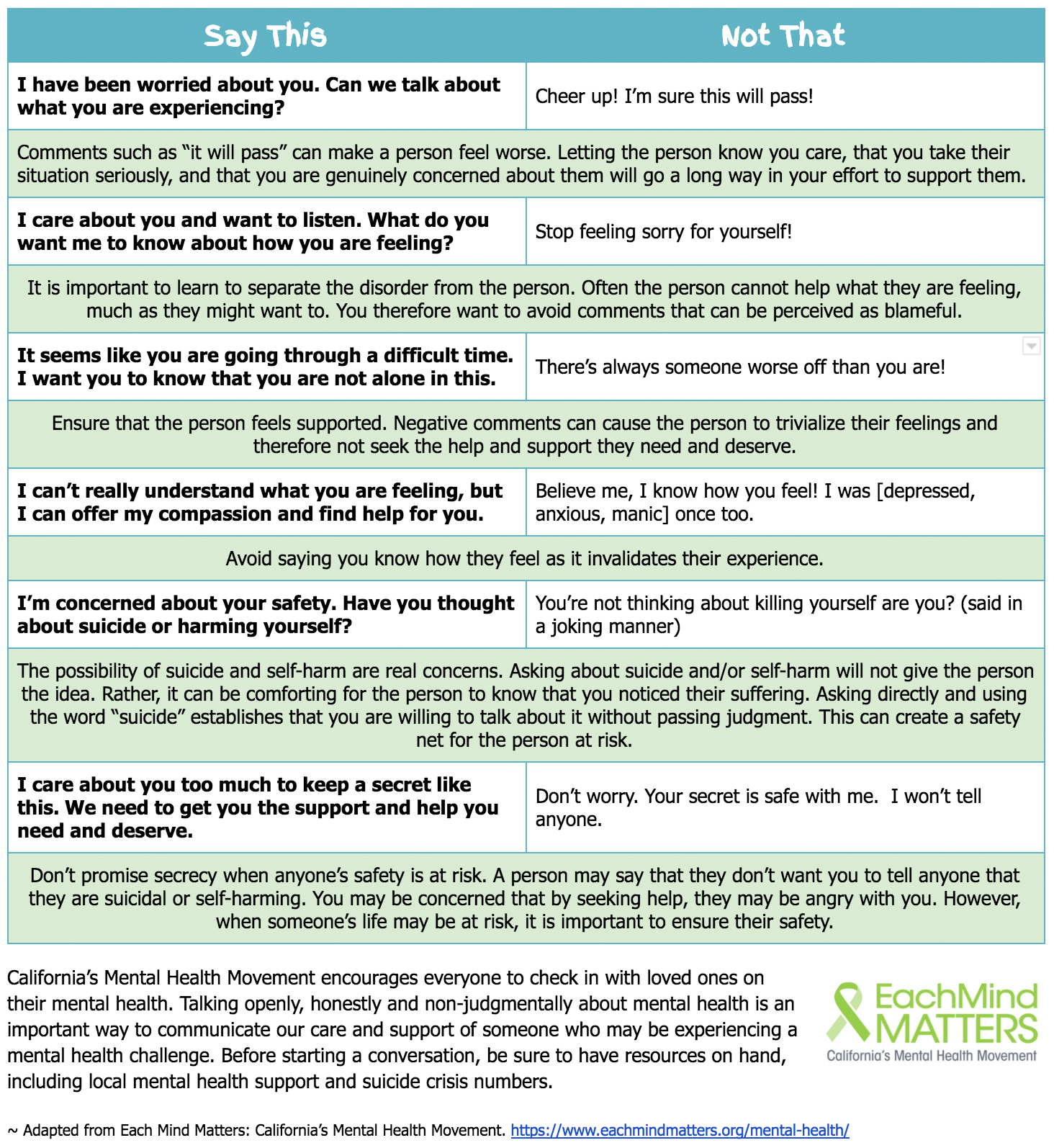 THINK ABOUT THE WORDS YOU USE... 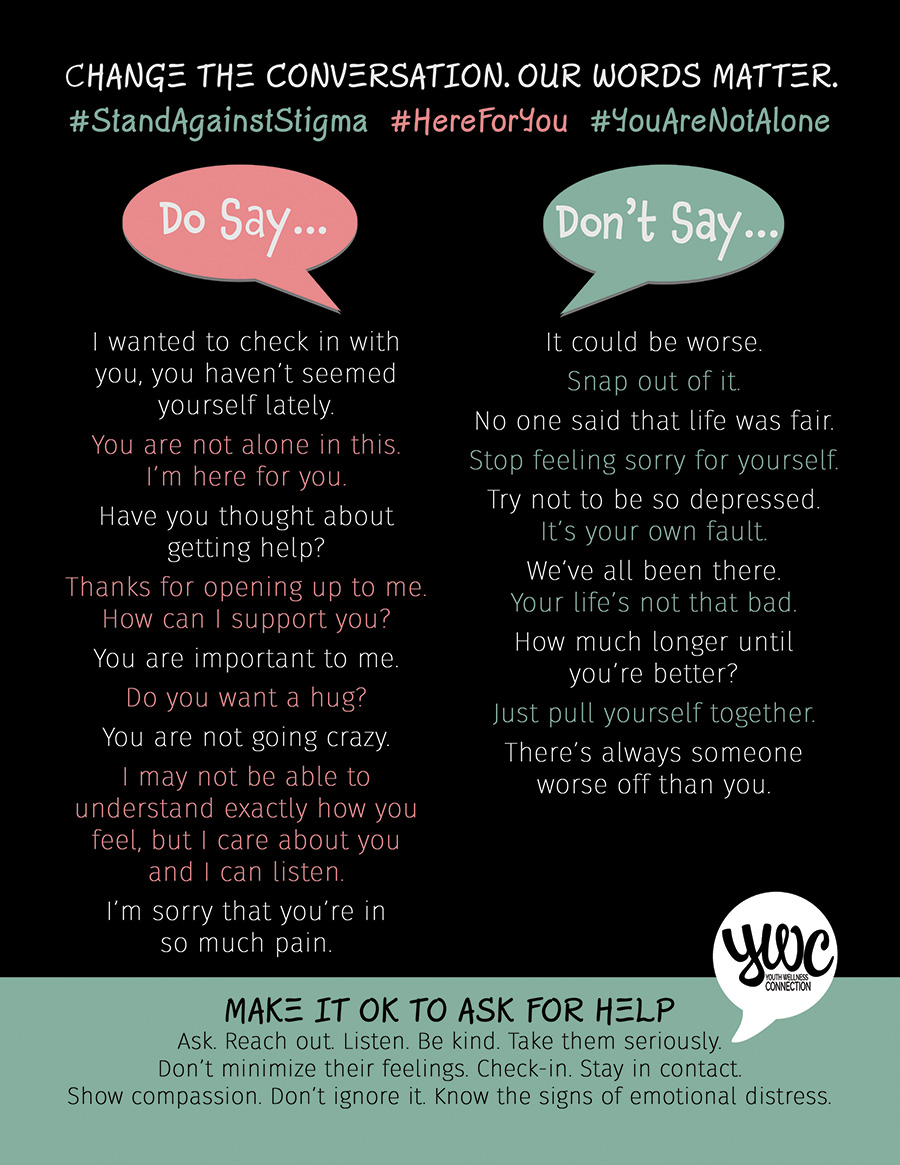 you can help stand against stigma 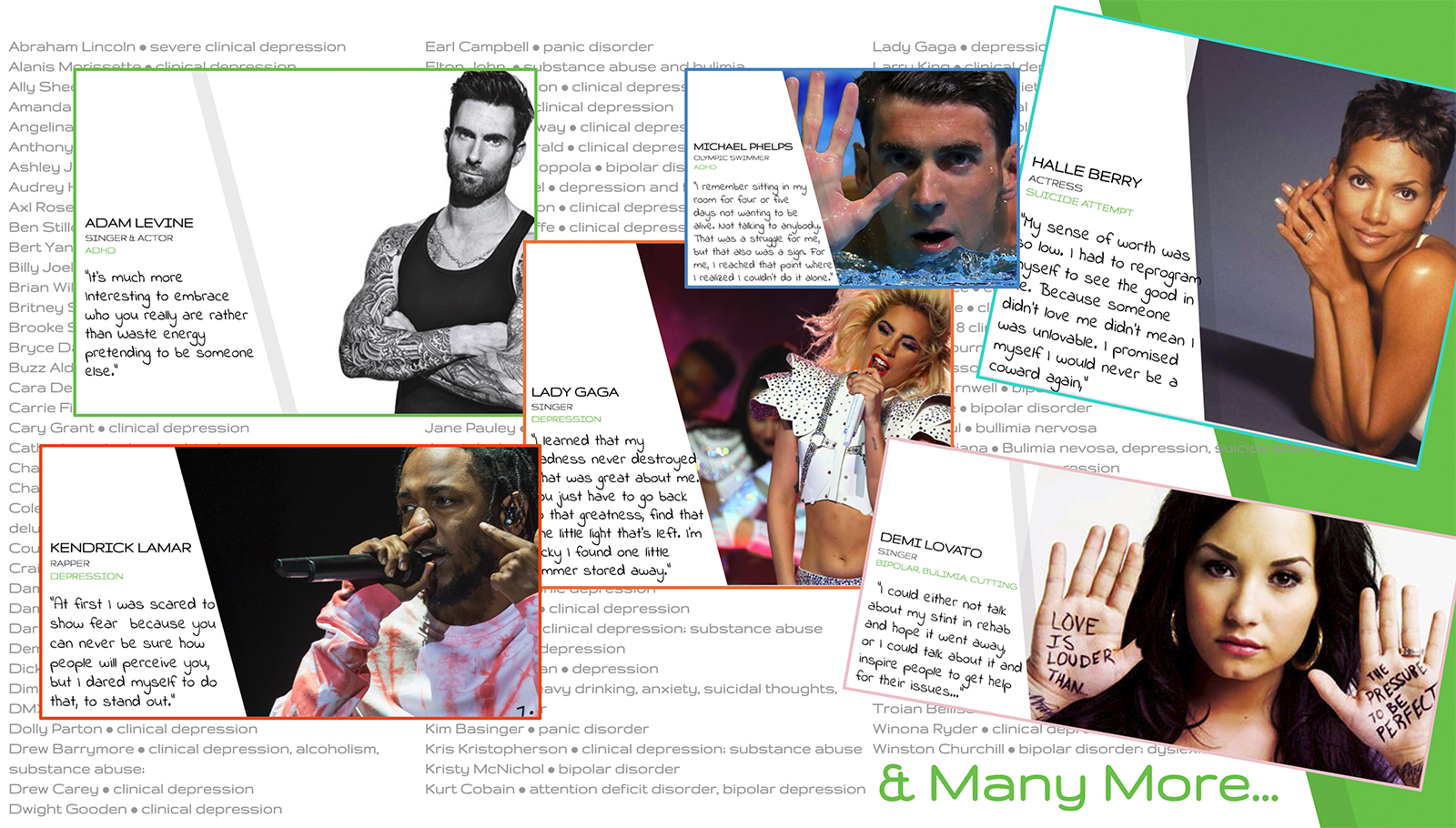 look me in the eye

After watching these videos, consider the following questions:

Scroll back to top